Guide to the Stratford Canal

This picturesque canal in the south midlands of England runs from the suburbs of Birmingham to Stratford-upon-Avon. You can cruise the Stratford Canal from our narrowboat hire bases at Stoke Prior in Worcestershire and Napton in Warwickshire.

A brief history of the Stratford Canal

At a time when the Birmingham Canals had a monopoly on canal transport in the midlands of England, the Stratford-upon-Avon Canal was designed as an alternative route to transport coal to Oxford and London. The Act from parliament giving permission to build was passed on 28 March 1793 and was finally completed in 1816.

The canal runs for just over twenty-five miles and consists of two sections. Roughly half way along the canal is Kingswood Junction, which has a link off to the Grand Union Canal.

Following acquisition by a railway company in 1856, the canal gradually declined and became unnavigable during the latter part of the twentieth century.

The National Trust took over the renovation of the canal in 1960 saving it from closure, with Queen Elizabeth the Queen Mother officially reopening the canal in 1964. The Stratford Canal was one of the first canals to be restored and this success led to other restoration schemes and  increased interest in the use of canals for pleasure cruising.

Once the canal leaves Birmingham it passes mainly through small picturesque villages until it reaches Stratford upon Avon.

From King’s Norton at the northern end of the canal you pass through the unusual King’s Norton Stop Lock, the only guillotine-gated stop-lock on the canal. Heading east you’ll enter the only tunnel on the canal, at Brandwood, which is a significant 322 m long. Like most canal tunnels it has no towpath but in this tunnel boats were not ‘legged’ through, but rather pulled through using a handrail on the wall of the tunnel, parts of which can still remain today.

Not far out of Brandwood Tunnel the canal veers south east towards Lapworth Junction. On the outskirts of Shirley the brick-built Major’s Green Aqueduct carries the canal 10m above Aqueduct Road and the River Cole.

You’ll cruise through various bridges, including a swing bridge and a lift bridge before descending through the Lapworth flight of 18 locks, to reach Lapworth Junction.  There is a choice of route, either to reach the Grand Union or continue along the Stratford-upon-Avon Canal. The junction is almost exactly halfway along the canal.

The southern section continues the descent through the final seven of the Lapworth locks, passing under the M40 motorway just before the final one. The locks are closely spaced until those at Preston Bagot are reached, after which there is a 6-mile (9.7 km) section with just one lock in the middle. This nearly-level section contains two of the canal’s three iron aqueducts.

The easy cruising is interrupted by the Wilmcote flight of eleven locks in just over a mile, soon after which the canal reaches Stratford-upon-Avon.

Feats of Engineering on the Stratford-upon-Avon Canal

This canal has three interesting aqueducts with cast iron troughs, the largest at Bearley (or Edstone) near Wootton Wawen. The towpath on the aqueduct is at the level of the canal bottom, so you look up at boats as they pass you by.

Near King’s Norton Junction there is a disused stop lock, which used to prevent the canal taking water from the Worcester and Birmingham Canal when they were separately owned, but is now left permanently open. It is unusual in that it has two guillotine gates which are made of wood. When operational, they moved vertically in iron frames, and were counterbalanced by weights.

The series of locks which make up Lapworth Lock Flight on the Stratford-upon-Avon Canal are some of the most interesting to be found on the English Waterways. They are narrow and only one barge at a time can go through which means that transversing the Lapworth Locks can take some time – particularly the 6 to 14 sequence and shortly after that the 15 to 19 sequence of locks all of which are right on top of each other. Around halfway down the flight is where you’ll find the Kingswood Junction (the Lapworth Link) where you connect to the Grand Union Canal. 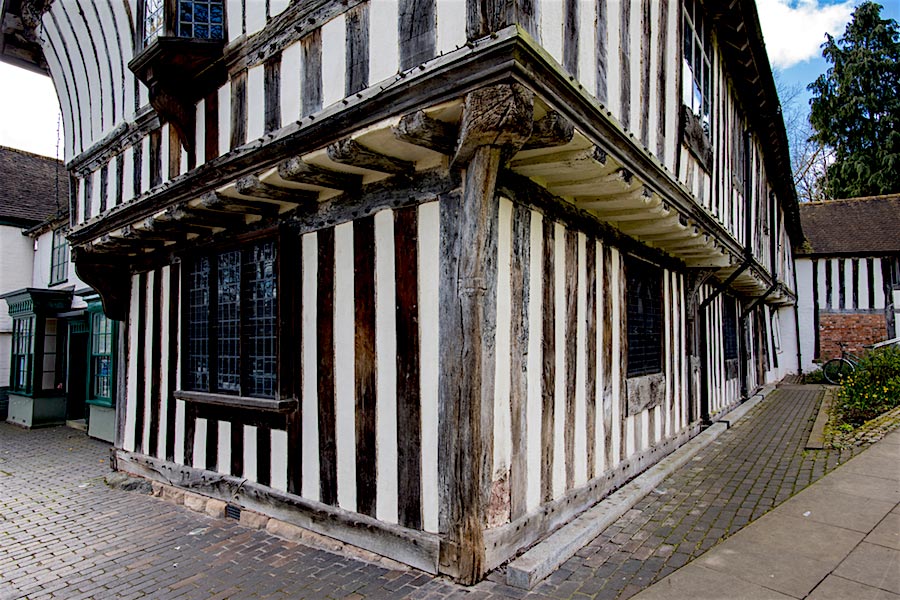